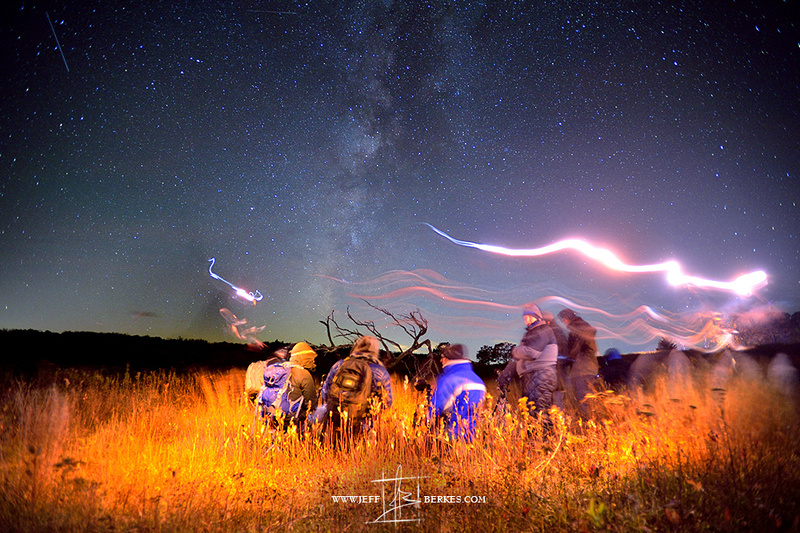 We started off the workshop with some bad weather which is never a fun thing. I typically have a headache all week long leading up to a workshop simply because I am checking the weather forecasts every hour. We all want perfect conditions and most of the time we get them. Sometimes we do not. 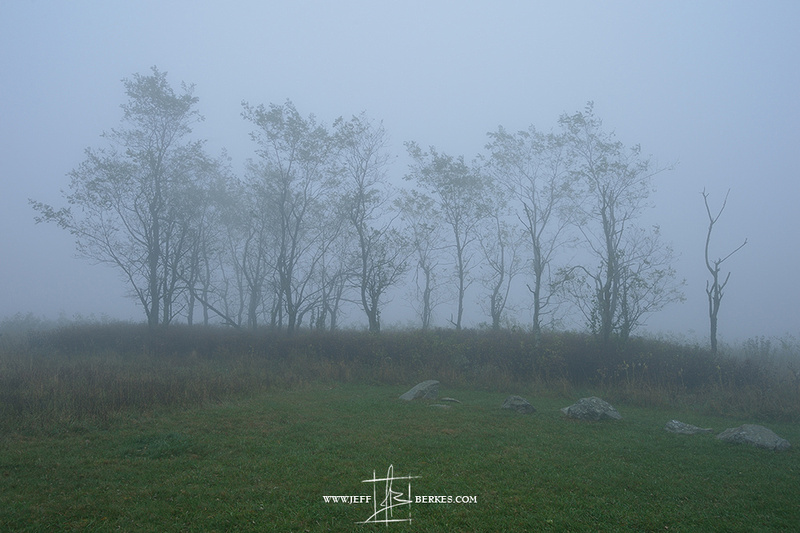 I arrived at our meeting location only to find myself in a cloud, literally. Our elevation here is over 3,500 feet, so we are no longer in fog, but in the clouds. The weather can change rapidly in the mountains, that goes for precipitation, winds, and temperature.  After speaking with the group members, I decided to cancel the first night. It's a very tough decision to make, but it ended up to be the right one.

I went to an overlook and said goodnight to my wife and to check the forecast again and with tons of clouds and more rain on the way, I felt comfortable with the decision I made for the group. Forty Five minutes later then rain started back up again just minutes after I set up my tent. It then rained until midnight, then off and on the rest of the night ending around 4:00 am. The winds picked up overnight to increasing from 20 mph to over 50 mph. The photo above is my campfire burning in the rain at Big Meadows Campground taken from inside my car.

The winds were gusting over 50 mph at times overnight and the temp's were in the mid 30's Friday night. I'm glad I brought my Marmot tent and zero degree mummy bag, without it I would have had some terrible sleep. I woke up early, and ventured out to the Meadow. The clouds were still pretty thick and the Sun didn't peak out until about 9:00 am. The clouds were  dense which created some nice contrast at times in the western sky. 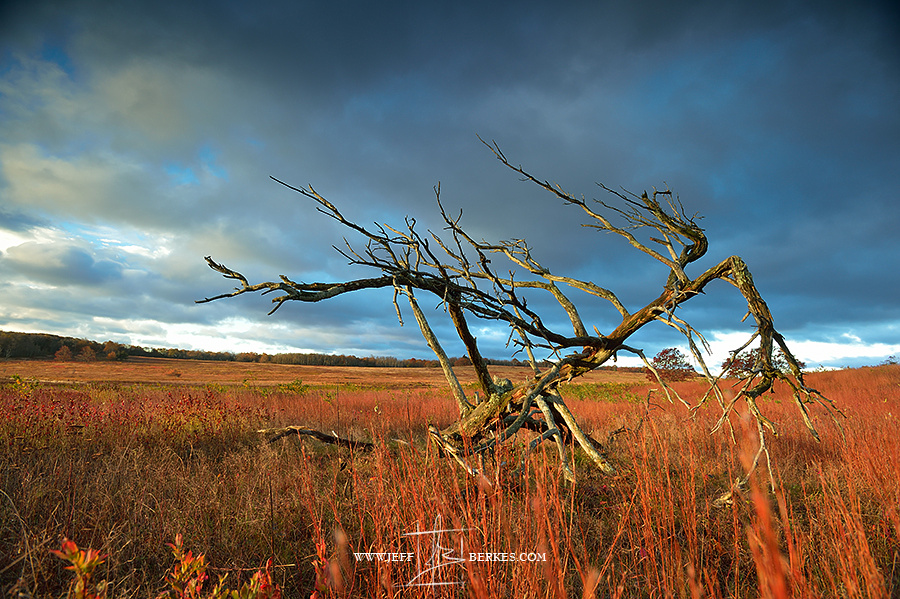 This tree has always been a staple for me in Shenandoah. I discovered it in the late 1990's while on a camping trip with some friends. I was fresh out of high school and determined to explore the US and this park was one of my first real National Park experiences. After 20 years of visiting the park, this was the first year I saw the tree toppled over. The last time I was here was about 2 years ago, and the tree was still standing. 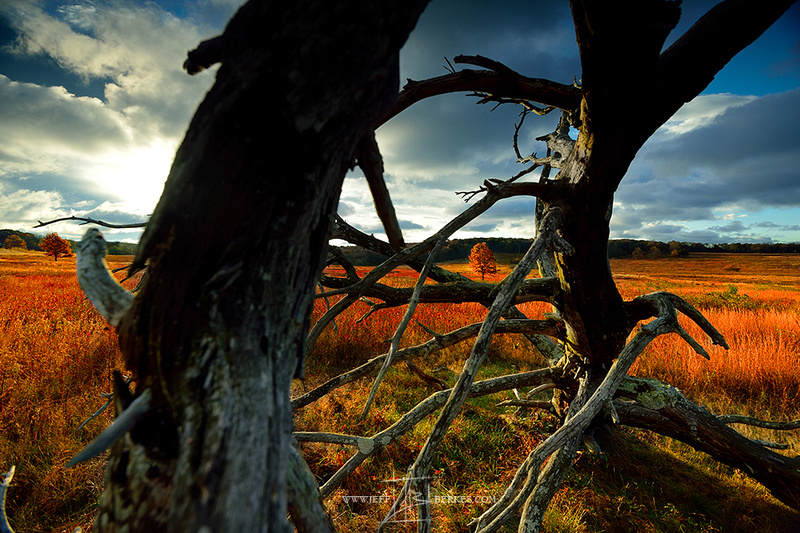 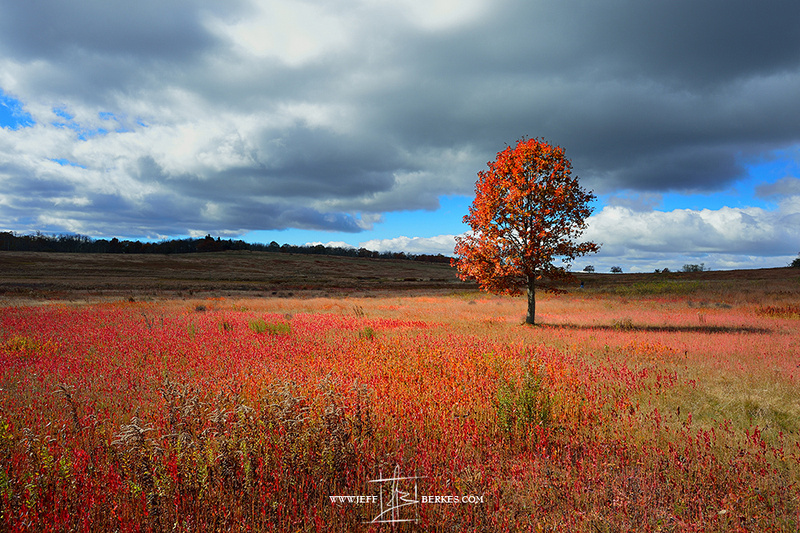 We all met back up Saturday Noontime for a hike in Big Meadows to examine our shooting locations for the night session. Scouting out your locations ahead of time during the day helps you visualize your shots for at night. This makes you much more productive when out at night. You know what you wants, where you want it, and when need to shoot. It takes a little planning and a little research, but your efforts typically pay off nicely. 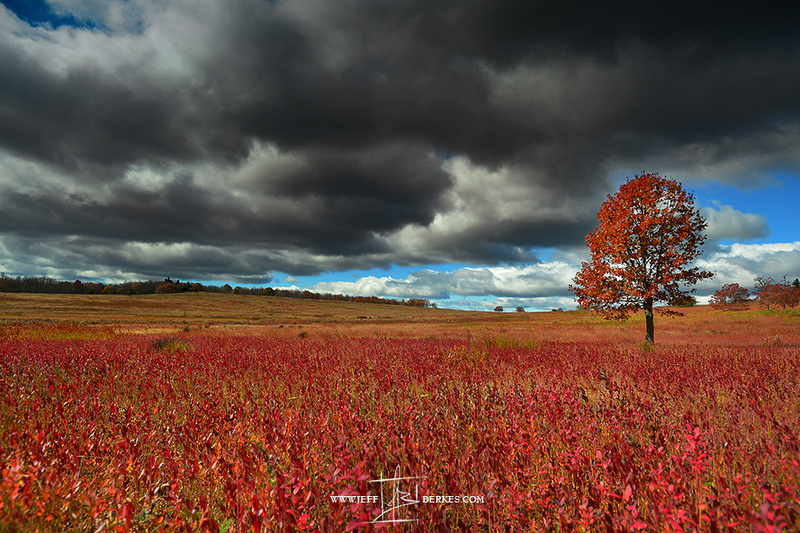 The clouds were moving quickly and changing the color of the landscape by the minute. One of my favorite things about Shenandoah National Park is that every trip is different, and the park offers something new and unique each time I visit. This time I saw some new weather in the form of 50 mph wind gusts which last 48 hours,  participants got a few nice shots of double rainbows over fall colors which is a rare treat as well! We also had wind chills in the teens and 20's all weekend which made us all realize that winter was on its way. It was hard to remember the 70 degree and 80 degree weather we had the week before the workshop started. The warm weather slowed down the color progression which was good in some cases and bad in others. 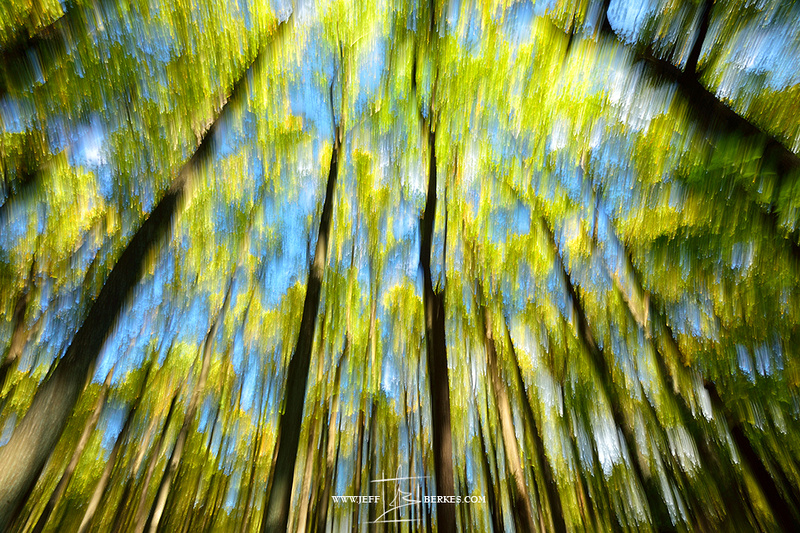 The above shot is just me playing around with dragging the shutter and moving the camera while I take the picture.. Try it, you can get some interesting results shooting around 1/10 sec. 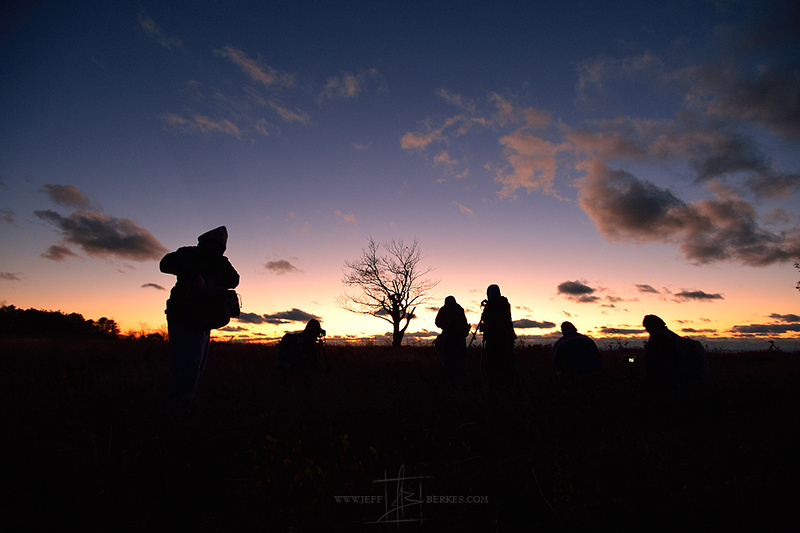 After our daytime hike and photo sessions, we met back up at sunset. With the winds still whipping up to 40 and 50 mph, we set our tripod low and widened the legs to eliminate camera shake from the wind. It worked very well too.  We also had a nice magenta / purple glow during sunset which was very unique as well. I typically will see that purple hue in the southern coastal areas, but not often up north.

We took a short break in our cars to warm up and get ready for the first night shoot location. After getting everyone dialed in, we began to use some light painting techniques to illuminate the foreground. My flashlight broke the day before the workshop and I couldn't get a replacement in time, so I used a participant's flashlight and diffused the light / color corrected it with a plastic trash bag from Wawa ( an awesome store) Sometimes things happen on the road and it was a nice way to show everyone how to improvise in the field. It was super windy that night and light painting didn't seem like a great option for some of the shots so I brought out my off camera flash at times and used that to illuminate some shots, freezing that action, and not letting the wind blur the trees and grasses in the photos 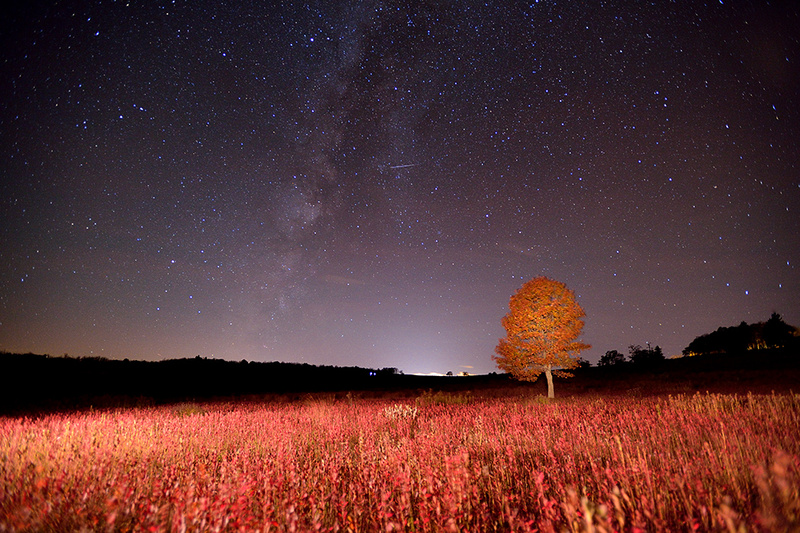 We continued on to the next location and did more experimenting with light painting and got some nice shots here. This is the same tree we scouted out during our daytime hike ( pictured above)

It was hard to even see a cloud Saturday night, unlike Friday night,  but around 10:30pm a few "wispy guys" started to pop up near the milky way which isn't a problem for me. I actually like how clouds can add to a photograph during the day and at night. Weather makes great shots, the more weather / nature in the photo the better! 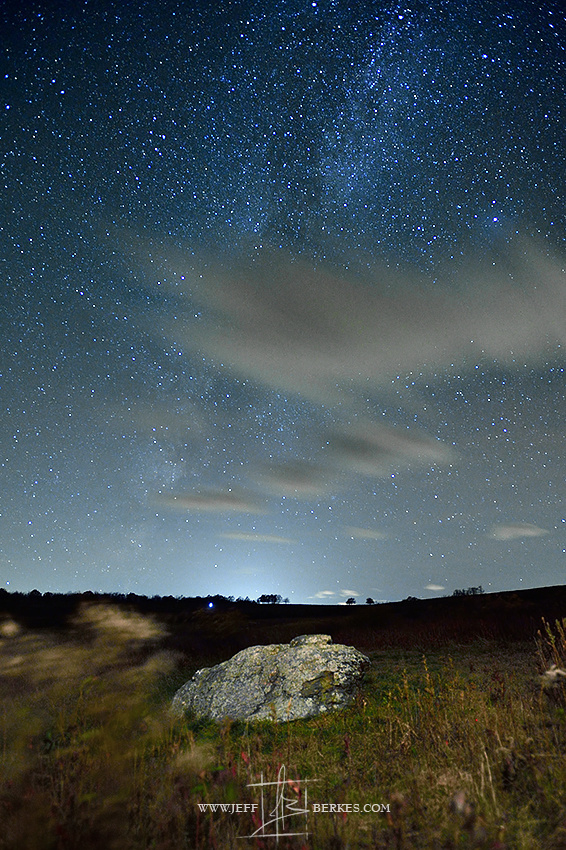 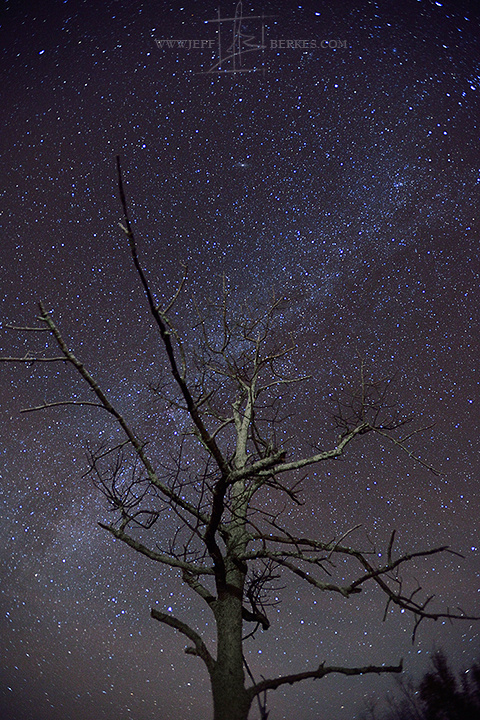 We continued on to a few other spots and witnessed a lot of awesome meteors including one fireball around midnight. 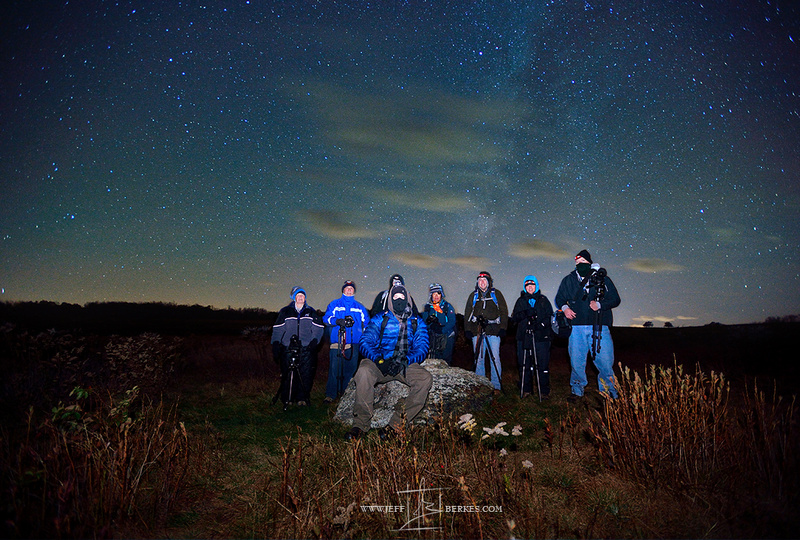 Here is the group shot (-2) Taken at Big Meadows. I used a Nikon SB-800 Speedlight to taken this shot on my Nikon D4. 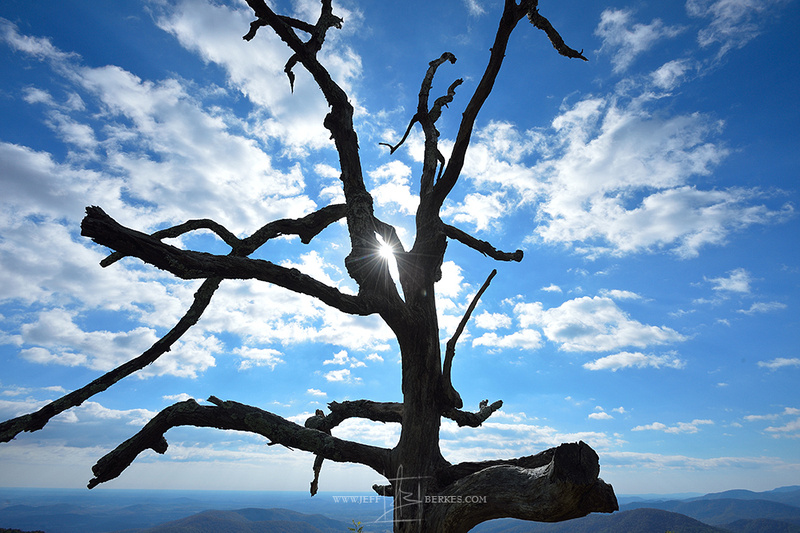 After a long night out in the cold, I caught up on some sleep and warming in my tent before heading back home Sunday morning. I had a great time seeing some workshop alumni and meeting some new friends. What a great group, and I am very grateful for the opportunity to meet them and share my passion for night sky photography during the NPS 100 year anniversary!

ghanaweb news today(non-registered)
One can appear for the Army Rally Bharti or also called as Army Direct Bharti Recruitment. Here in this article, I am going to share with you the complete information about Indian Army Rally Bharti.
internal meeting room booking system(non-registered)
Easily, the article is truly the best topic on this registry related issue. The whole blog is very nice found some good stuff and good information here. Thank you for sharing this article.
what is a room booking system(non-registered)
This is actually the kind of data I have been trying to find. I will visit again for more quality content and also, recommend this site to all. Thank you for sharing this article.
desk management  app(non-registered)
You re in point of fact a just right webmaster. Education is unmistakably a sticky subject. I feel nice to be here reading your authentic work.
meeting room touch screen(non-registered)
This is an awesome site and I will definitely prescribe to my friends. You actually understand how to bring a concern to light making it essential. Thank you and waiting for your new post.
No comments posted.
Loading...