My first workshop of the year kicked of in one of my most favorite places, Death Valley National Park. The weather was perfect camping with daytime highs in the 70's and lows in the 40's. Some nights in the mountains went down into the 20's overnight. 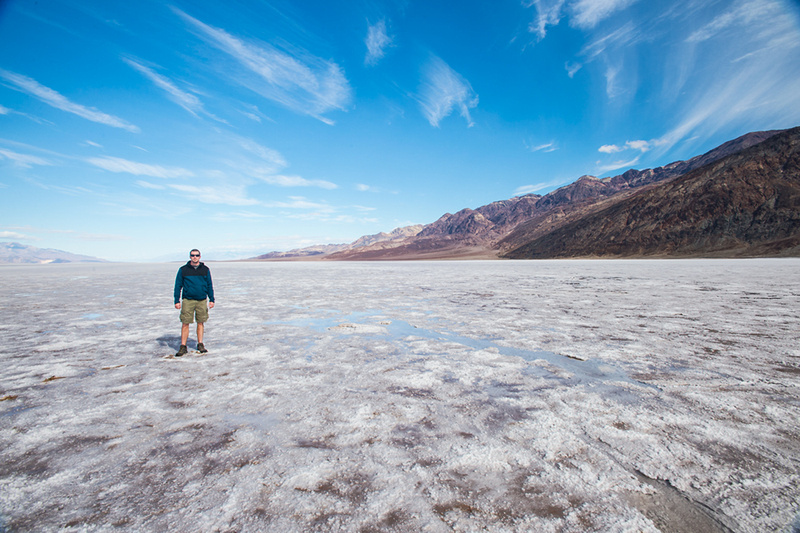 i arrived a couple of days early to scout things out, see what has changed since last year and to look for new and interesting features to photograph with the group at night. My first stop was Badwater Basin (pictured above). I have been here several times and have never seen so much water out there. The salt deposits were hard and did not crumble , but mini rivers were flowing through the salt flat. 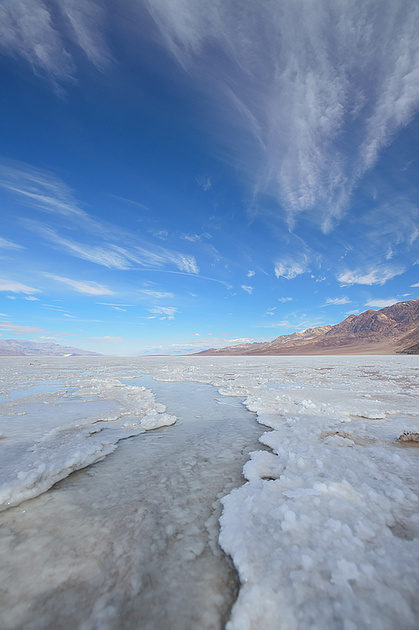 (Photo Above) Badwater Basin on February 27th, 2017. It shows a flowing stream of water running through the basin about 1 mile out from the parking lot. It made for some nice images. Totally new from my previous experiences there, that is why I love to revisit areas over and over again. You will always see the place in a different form and light. 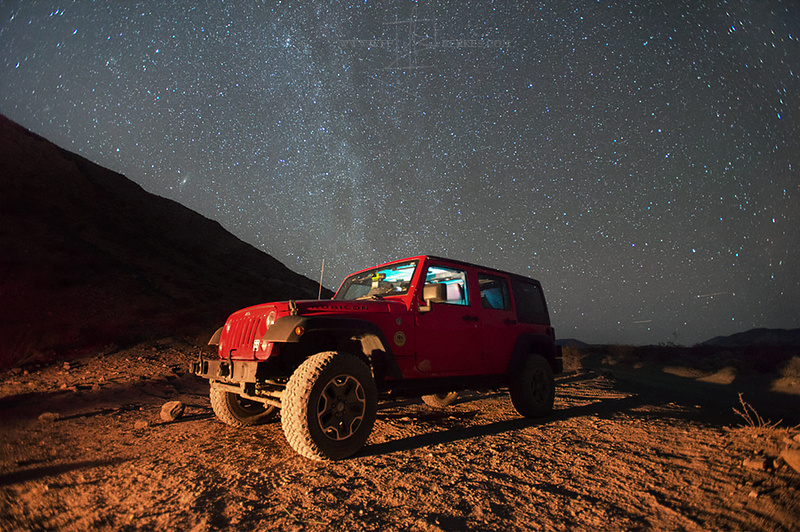 We went out to the Racetrack Playa for one last run and had yet another incredible time there. The low's overnight went into the mid- upper 20's. The elevation is about 3,600 feet above sea level. There is a campground a couple miles south of the Racetrack where you can camp. DO NOT drive on the Racetrack with a vehicle at any point and please do not walk on the playa if the surface if it is wet. You will seriously damage its beauty for many many years. 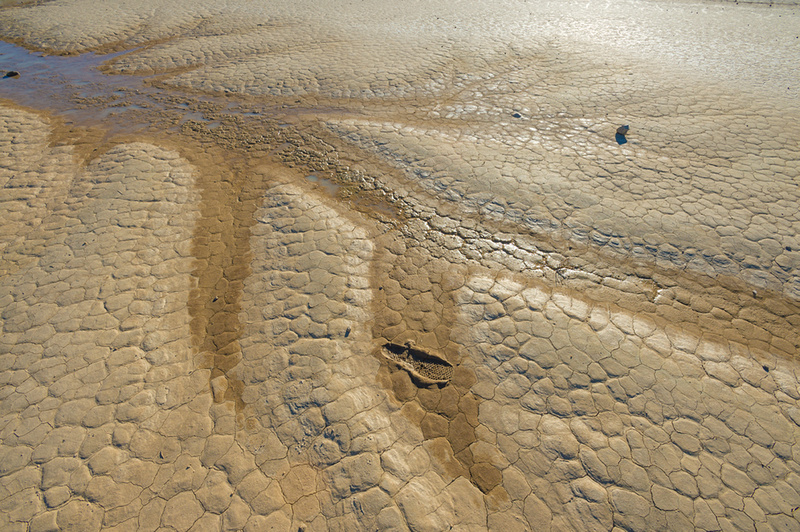 FOOTPRINTS ON THE RACETRACK

California has been getting some much needed rain and snow. Maybe too much in some spots, but the desert does get it rain. Death Valley typically sees most of its rain during the winter months from November to February. The Racetrack itself was completely dry when I arrived except for one small portion near the parking area. Everyone should practice a (Leave No Trace) mentality where you leave things they way you found them. This is obviously a good example of someone who does not have enough respect for nature to be out here in the first place just to leave footprints all over the place. 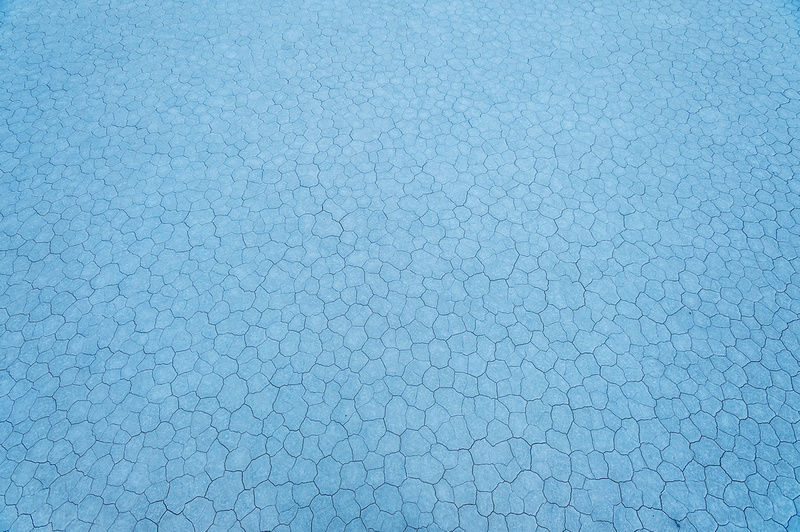 The photo above was taken at the Racetrack, a detail shot of the surface. The color temperature has a very cool blue hue to it because of two reasons. First, it had to do with my color temperature setting and also the fact that I was the shadpws during the blue hour.  The color of the surface itself is really a tanish color. I would  have had to adjust my color balance from 5200k to 8000k to match the true color of the racetrack as you will see in the next photo. This image was taken before the sunset over the mountains to my west. Sunlight was still hitting the playa at this point. It was very hard to find some good rocks with trails this time. It all had to do with people coming and taking the rocks from the Racetrack. We would see a track without a rock at the end numerous times. It was very frustrating because I wanted to revisit some rocks I had photographed in years past. This needs to stop before we end up trashing yet another magical place. With that said, we did see other moving rocks and a few nice ones at that. 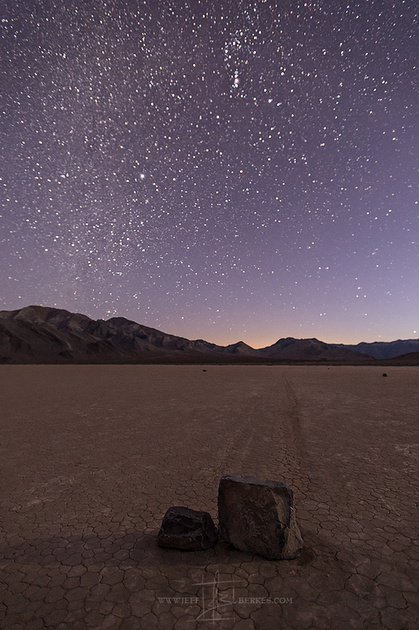 The photo above is a single exposure taken on February 28th, 2017 while the slender crescent moon was setting in the western sky with Venus close to its side. 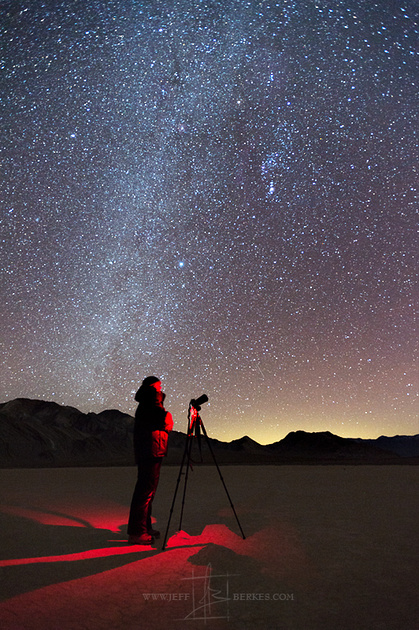 (Photo Above) At the Racetrack taking pictures of the Zodiac Light and the Milky Way! 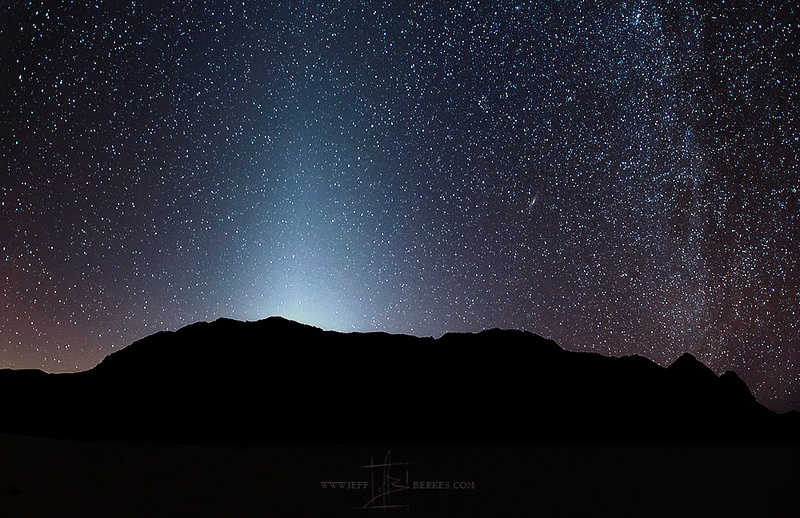 (Above) Zodiacal Light from the Racetrack Playa | February 28th, 2017 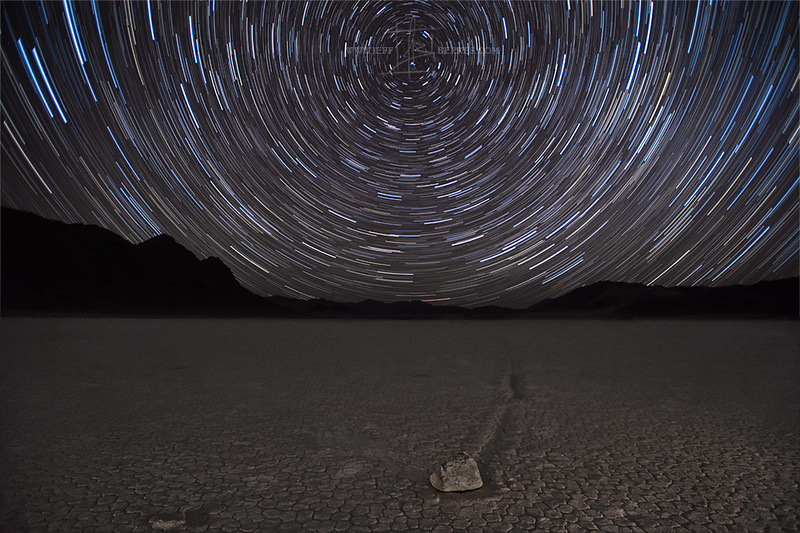 STAR TRAILS AT THE RACETRACK

Doing some longer exposures at the Racetrack with the North Star for a nice "Pinwheel" effect. 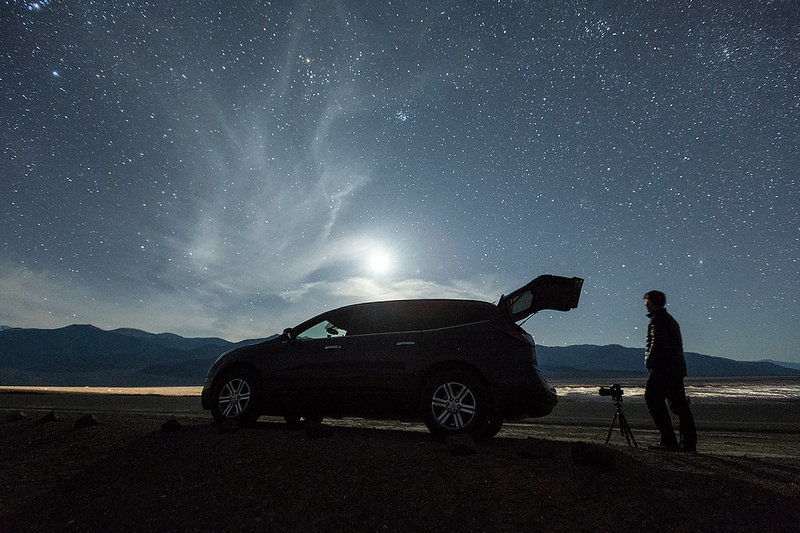 Making a quick stop for a photo op! Reflections in the ice. When the Sun went down at the Racetrack the temps dropped quickly and ice eventually formed here overnight. It made for a few interesting shots before the official workshop began the following night. 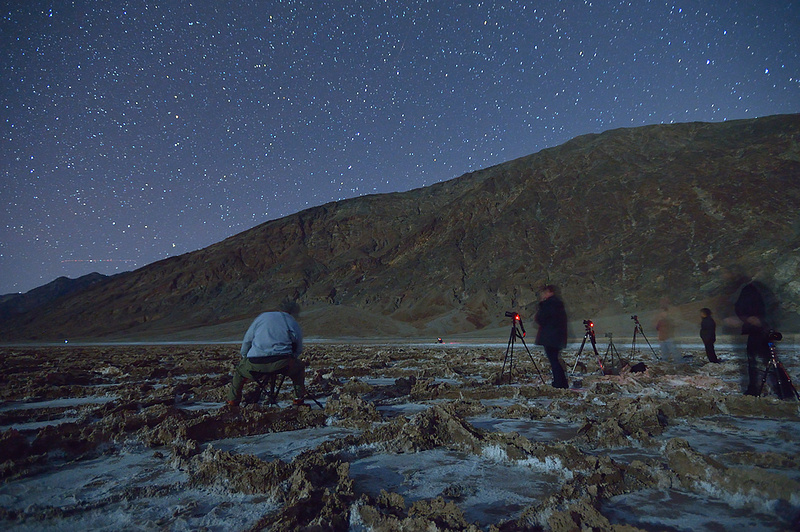 The first night of the workshop we spent capturing some nice still images as well as star trails. We saw numerous meteors the first night including a couple fireballs. The participants camera's were set up facing north to capture the "Pinwheel" Star Trail at a favorite location of mine. 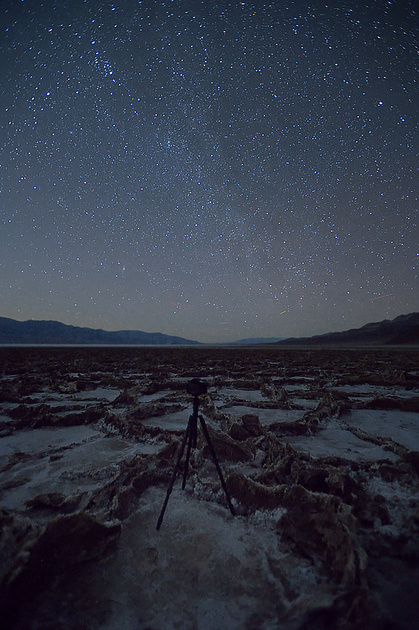 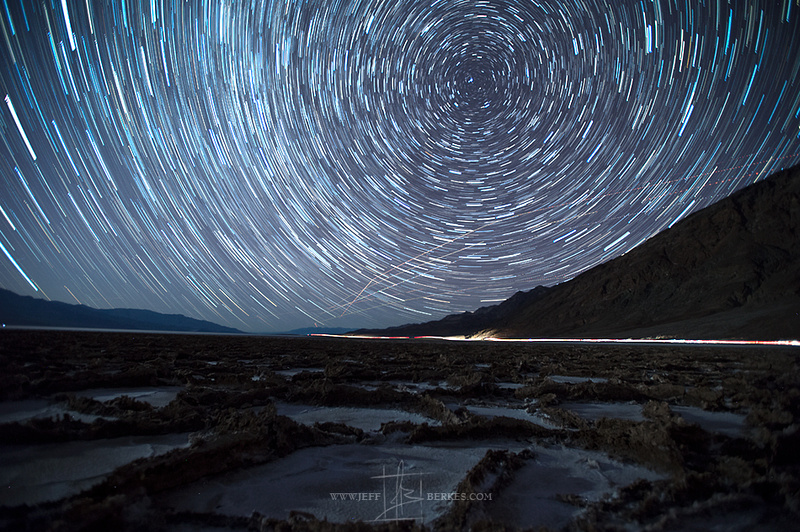 This is the result of a 45 minute star trail. A car drove by during the exposure as seen streaking through the photo.  We used the setting moon to illuminate our foreground will giving us a lot of stars in our exposure. Longer star trails like this one needs 1 - 2 hours to produce results like this. I had a nice reflection in the water too. 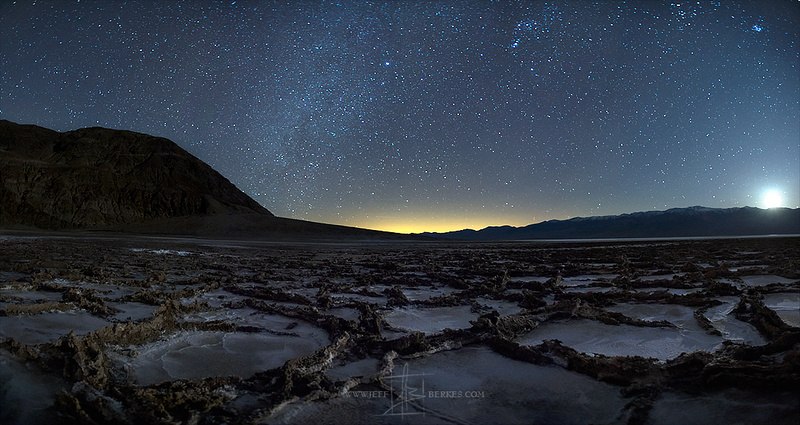 After the night shoot we met back up to shoot the Milky Way rise above the horizon and catch Sunrise at Zabriskie Point. (Photo Above) 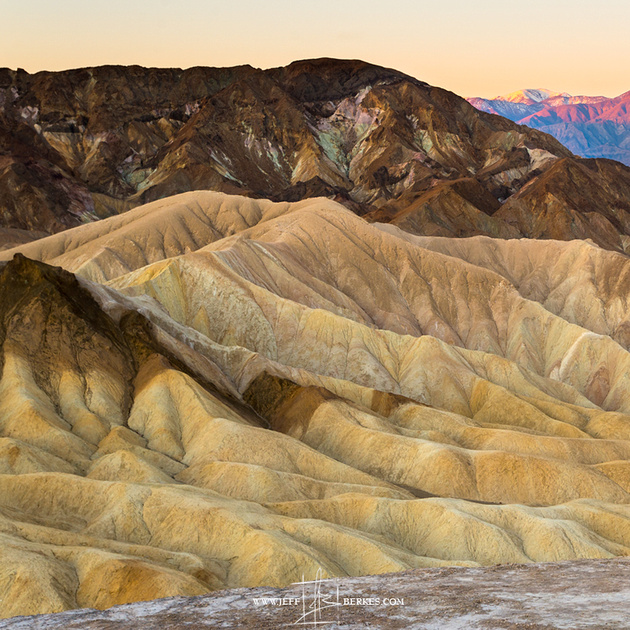 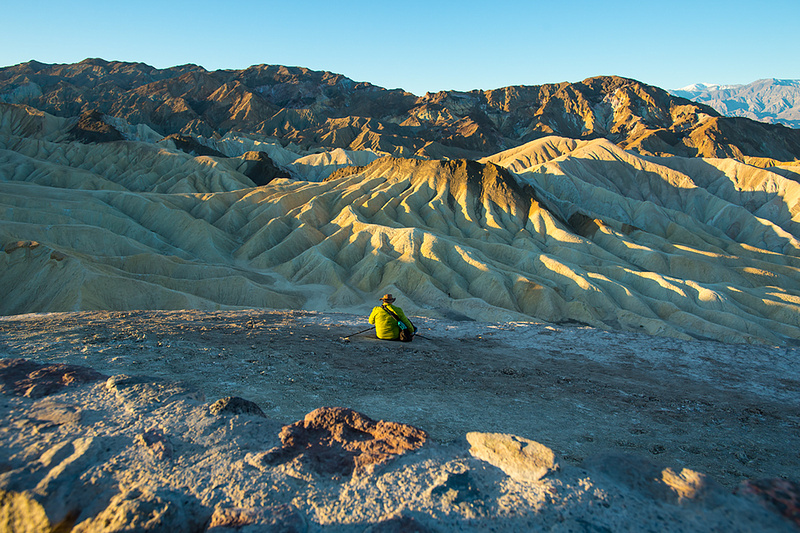 Taking in the beauty of the morning light in Death Valley 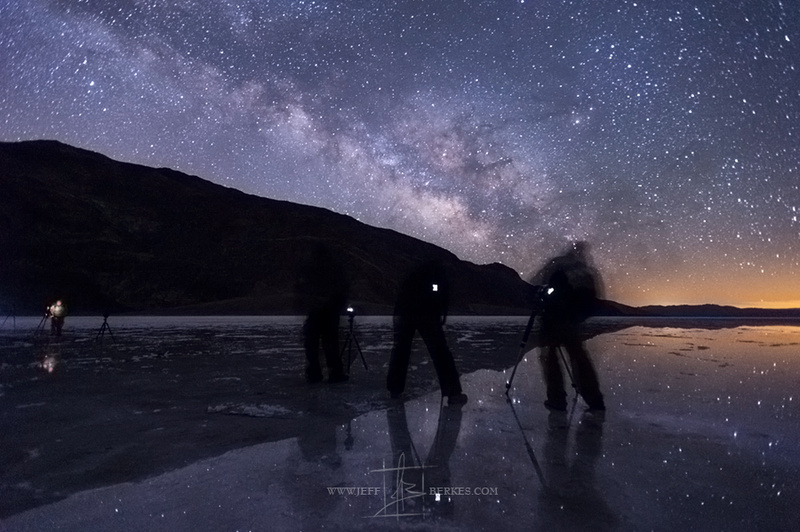 Getting some reflection shots with the Milky Way in Death Valley for our 2ns Milky Way Shoot. I have never seen this much water in Badwater Basin in my life!  Some spots were 3" - 6" deep. It was an incredible sight and it made for some one of kind photo ops for the group. Standing in freezing cold water for 3 hours wasn't the most ideal thing to do for most people, but we managed and pulled away with a huge score and kudos to everyone for sticking in there! 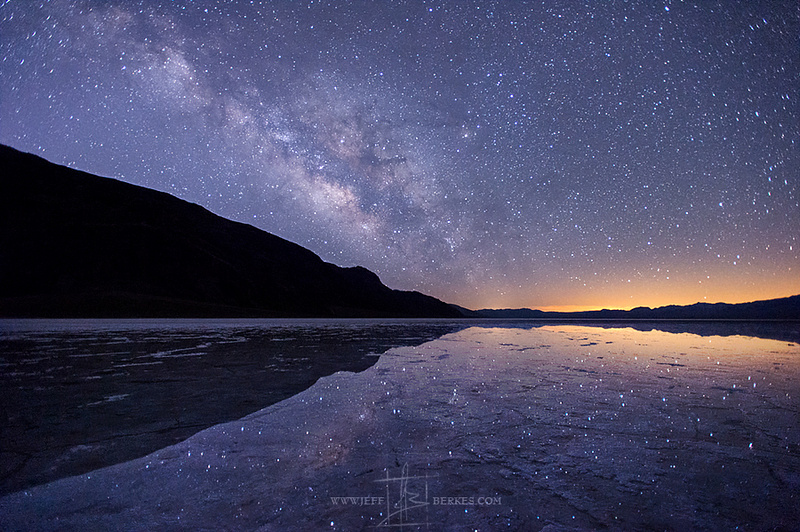 One of my few photos from that night at Badwater Basin with the Milky Way. All in all, the workshop was a huge success and I met some great people and had an amazing time with everyone. You can see a attendee enjoying the beauty of this park and the night sky just before the dawn started to break.

Here is a panoramic of the Milky way over Badwater Basin with the Amargosa Range in the background. The light pollution from Los Angeles (a 280 mile drive south) can easily be seen here. It's low on the horizon but it is there. It also adds an interesting splash of color to to photograph. There are very few times I welcome light pollution, this was one of those time. I call this photo (Kiss of Death) because the reflection of the mountains in Death Valley are shaped like a pair of lips. It's like the desert was trying to kiss me.

We ended the workshop on a high note with an incredible  sunset and a nice warm breakfast the final morning. Again, I thank all of the workshop participants who came out and spent time with me in one of my favorite places. It was a pleasure meeting you and I hope you have as much fun with me as I did with you. I look forward to returning again in 2018 too! If you are interested in joining me next year, shoot me an email, and follow with 2018 workshop schedule. It will be update in May 2017.

create team freefire pubg fortnite(non-registered)
First there was the Nes - The Nintendo Entertainment System, a great piece of gaming equipment that revolutionized entertainment in the home. From the Nes on video gaming has progressed faster than anyone ever imagined. Graphics have become richer, storylines more involving and the game play more detailed and interactive than anyone thought possible.
كماليات(non-registered)
Knowing how to get the best car lease deals is very important. It enables you to get the best offer in the market. There are many lenders in the current market.
الستات(non-registered)
Occupational health Advisor's (OHA) can contribute by helping managers to manage sickness absence more effectively. The OHA may be involved in helping to train line managers and supervisors in how to best use the occupational health service, in how to refer staff, what type of information will be required and what to expect.
سوق السيارات(non-registered)
This article explains why luxury cars will are becoming much more popular in China, attracting the investments of big car manufacturers. Some companies are reaping great rewards from this opportunity.
دلعي سيارتك(non-registered)
In the market for a car and buying used? Don't look any further until you arm yourself with our used car buying tips. This guide is the most complete out there, and will show you the whole process from finding the car to inspecting the car and sealing the deal.
No comments posted.
Loading...